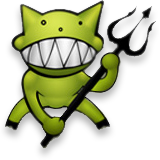 Yesterday a reader asked for How to get back his details when he was registered on Demonoid before it went down. As most of you might know Demonoid tracker was down for over a span of 2 years and just recently came back online. Over these long 2 years, many of the users have forgotten their passwords and username for their user accounts on Demonoid. So let's take a look at how we can recover those:

Hello everyone, as most of you might know Demonoid is a online torrent tracker which was created by anonymous Serbian known only by the pseudonym "Deimos" and "Zajson". The tracker used to index torrents uploaded by users and the site was the 2nd largest torrent tracker after The Pirate Bay. But was the largest one when pirate bay was temporarily taken down, after that pirate bay came back online. But a tragedy befalls us all.

Hi Friends Demonoid is a website and BitTorrent tracker created by an anonymous Serbian known only by the pseudonym "Deimos" and "Zajson". The website indexes torrents uploaded by its members. It is the largest, and the most popular, public tracker, since The Pirate Bay tracker was shut down in November 2009. Demonoid.com was ranked the 502nd most popular website overall in December 2010, according to Alexa. Demonoid's torrent tracker had an estimated 3 million peers in September 2007. The site had over 252,427 torrents indexed as of May 3, 2009 (torrents uploaded prior to August 4, 2005 were removed to free server resources).
(According to Wikipedia)