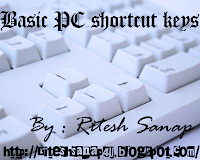 Shortcut keys help provide an easier and usually quicker method of navigating and using computer software programs. Shortcut keys are commonly accessed by using the Alt (on IBM compatible computers), command key (on Apple computers), Ctrl, and/or Shift in conjunction with a single letter. The de facto standard for listing a shortcut is listing the modifier key, a plus symbol, and the single character. Or in other words, “ALT+S” is telling you to press the Alt key and while continuing to hold the Alt key, press the S key to perform the shortcut.

The below basic shortcut keys are a listing of shortcut keys that will work with almost all IBM compatible computers and software programs. It is highly recommended that all users keep a good reference of the below short cut keys and/or try to memorize the below keys. Doing so will dramatically increase your productivity.